The Northern California DX Club was founded on October 10th, 1946, by the charter members (Photo on the right), as well as Don, W6AM.

Because he lived outside of the territorial limits of the Northern California DX Club, Don, W6AM (Pictured on the left), became the Club’s the first Associate Member and Charter Member.

The articles of incorporation were drawn up and submitted to the Notary Public, Violet Neuenberg, on the 18th day of December 1947.

The articles were signed by Horace R. Greer, W6TI: D. Reginald Tibbets, W6ITH: and Felix Caldera, W6IKQ. A tax exemption was applied for and received on the 9th day of March 1949, bringing the club into existence as the world's first incorporated DX Club, a status of which it is quite proud. The club has since set DX standards and operating ethics for DXers worldwide and has established the respect of DXers everywhere.

The founding of the Northern California DX Club was announced to the Amateur Radio Community with a notice published in the March 1947 issue of QST. (Pictured on the bottom - Public Domain)

“The objectives of the club are to bring together Radio Amateurs interested in DX; to secure closer cooperation and coordination in their efforts to achieve DX; to elevate the standards of practice and ethics in the use of Amateur Radio communications; and to participate in the exchange of Knowledge, methods, data and information that would be mutually beneficial to the Members in achieving DX accomplishments.”  - Extracted from Club Bylaws (May 8 2014) 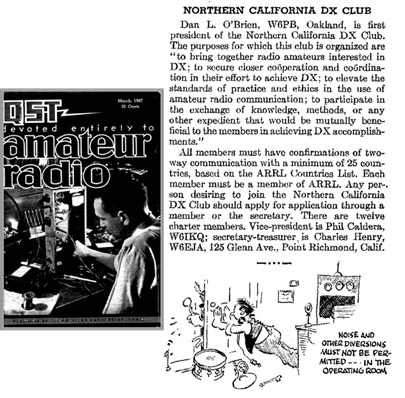 The club activities include presentations from outstanding DX speakers and Dxpeditioners as well as others with specific related knowledge they would like to share with the membership. Examples of this include Antenna Theory, Digital Operating (such as FT8), as well as presentations from Invited vendors. Club meetings usually start with a social hour, discussions concerning Dxpeditions, rare countries, operating habits, propagation conditions and other related topics. There are also announcements on our repeater (W6TI 147.36 +600 PL 110.9) of the latest and rarest DX countries coming on the air, as well as via a private email service. As a side note, the W6TI repeaters call sign is the former call signs of one of our founders, Horace R. Greer. In addition to regular meetings, we generally have a members BBQ in July as well as a holiday party in December.

Club membership includes top personalities from every segment of the DX world, including many international associate members. The development of life-long friendships among club members has been the most frequent and happy by-product of its activities.